The team brought the North Pole celebration from the icecap back to civilization today. How wonderful it is to rediscover the marvels of indoor plumbing after toughing it out day after day on the icecap, not to mention modern heating.

After hot showers and a bit of relaxation, the team went off to dinner to toast their success and share stories about the expedition. As the rigors of daily life on a North Pole ski expedition--cooking breakfast in separate tents, breaking camp, putting in miles, taking short breaks, pitching camp, cooking dinner in separate tents, etc.--don't always allow the team to regularly gather as a whole, having a leisurely dinner together when it's all said and done is extra special.

Some team members will depart soon. Others will linger on a while--Longyearbyen is a great place to spend a few days dogsledding, snowmobiling, skiing, museum visiting or just poking around the very charming town. The team shared an awesome journey together. One they will certainly never forget.

Big thank you's to everyone who followed along.

At the Borneo Basecamp...

After spending the night at the North Pole the team was picked up by MI-8 helicopter and transferred to the Borneo Basecamp. Borneo is a very unusual basecamp that only exists for a few weeks every year. The team is enjoying the heated mess tent and having a great time celebrating their accomplishment. They are dancing, drinking & there have even been a few naked plunges into the Arctic Ocean!

We've received a few audio updates that get cut off but we will post them soon. The team will be returning to Longyearbyen tomorrow and they are, no doubt, looking forward to hot showers, a several course meal that's not served in a bag, and a warm bed.

Check back again tomorrow for the final update from the team! 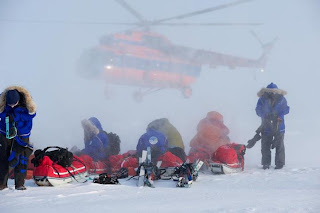 They made it! But before we join the celebration, here's a quick account of the lead up to the team's awesome accomplishment:

Pitching camp south of yesterday's big open lead paid dividends today. By the time the team broke camp this morning, sections of the lead had frozen solid enough to support sled and body-weight. The team found an easy route across, and carried on towards the Pole.

Up until the final half mile they progressed very quickly, but Sedna, the goddess of the Arctic Ocean, wasn't willing to give the Pole up without a fight. The team met some of the most challenging rubble fields that they're encountered thus far when they were literally in sight of the Pole! It took them a little over an hour to cover the last half mile.

It's celebration time now! Word around the cook tent is that the Hearns have a small supply of sloe gin and Keith and Rick always travel with a well stocked party stuff sack. In any case, the team will have a great time calling loved ones, celebrating and reflecting on their great accomplishment.

Thanks again for following! Check back for expedition photos.

After navigating through more challenging conditions--ridges, rubble and deep snow--the team pitched camp after covering about 6.5 nautical miles in as many hours. Their current location is 89 north 89 degrees, 53 minutes. The team had the energy to continue on further, but they came upon the largest open water lead that they've seen so far. A lead is the open water between two or more plates of ice that have drifted apart. Leads can sometimes resemble rivers with clean, well defined banks that stretch on for considerable distance, but they often have irregular edges and narrow sections where teams can cross by building ice block bridges.

The team opted not to cross the lead tonight because it's often easiest to simply wait for narrow sections to freeze up to the point that they can support sled toting skiers. If they continued on tonight, they may have found a way across the lead and through the rubble, but they would have had to expend A LOT of energy to travel a short distance, compromising their energy stores for tomorrow's push for the Pole.

The night before possible "Pole days" is an exciting time. You can never take tomorrow's goal location for granted, but it's hard not to dream about standing on top of the world! To make the evening even more exciting, the team has already seen one seal in the next door lead. It's a bit colder today (-22 C), but seal watching provides a lot motivation to leave the warmth of a cook tent.

To celebrate the team's proximity to the Pole, PolarExplorers is holding a photo caption contest on our facebook page. Find the the photo of a past team member taking a dip in a lead on our facebook wall and post your caption as a comment. The author the best caption will receive a phone call from our team at the North Pole!

After a good hard day in fields of compressed ice, the team is resting at north 89 degrees, 46 minutes, east 166 degrees. Compressed ice, by the way, refers an environment where individual plates of ice smash into each other, and the fringes pitch upwards forming pressure ridges and rubble zones. In addition to forcing the team to scale vertical obstacles, compressed ice environments also degrade snow conditions--think pulling a wagon through sand versus across pavement. Windswept snow accumulates in all those little valleys between bumps and ridges, and, all the sudden, instead of skiing on a hard-packed icy crust, you're trudging through ankle, shin, even knee-deep snow. Sounds like fun, huh!?

Hardships aside, the team had another great day, covering ten nautical miles, and barring any serious weather deterioration, they've set themselves up to make the Pole by Wednesday night! And all that hard work has built up full-blown expedition appetites. During their call in, the team was tucking in to hearty noodle soups, fry pan pizzas and chicken teriyaki.

As for the weather, the mercury topped out at -15 C with a 10 knot wind at their backs. However, the tailwind, and the positive drift, had ceased by the time the team pitched their tents.

Way to go, team! If they keep it up, in two days they'll get to stand on every line of longitude at once!
Posted by . at 1:24 PM No comments:

The team is currently finishing off their day on the trail, and we at the PolarExplorers headquarters eagerly await their satellite phone update. In the meantime, we'd like to share our video collection. Check out our YouTube Library. It has everything from training and gear tips to an awesome video of last year's North Pole Dogsledding Expedition, narrated by Rick Sweitzer, the founder of PolarExplorers.

We'd also like to open the floor to any questions you might have about the goings-on of polar expeditions. Needless to say, day-to-day is quite different on the icecap, and piques curiosity. So, if you're wondering about how the team cooks, travels, brews safe drinking water, what they wear throughout the day, etc., the floor is yours. Fire away!

After a trail day with relatively few pressure ridges, the team is resting for the night at north 89 degrees and nearly 36 minutes, east 166 degrees, 55 minutes. With fewer obstacles in their way, the team clearly gave a huge effort to cover a great distance while conditions allowed.

If you've been following for a couple days now, you might have noticed that in addition to traveling many minutes of one degree of latitude, the team has covered many full degrees of longitude. This is because, unlike degrees of latitude that are a constant 60 nautical miles wide but vary in length, lines of longitude have a constant length, but, near the Poles, their width compresses. So the team allocates 7-10 days to travel the width of one degree of latitude, but, depending on icecap drift, they might travel across many "compressed" degrees of longitude in just one day.

Check back tomorrow for another update from the Arctic!

.
PolarExplorers is a premier polar guiding company helping individuals and groups from around the world achieve their dreams of standing at the North Pole, South Pole, crossing Greenland, or exploring other exotic destinations in the Arctic and Antarctic. Visit us at online at www.polarexplorers.com